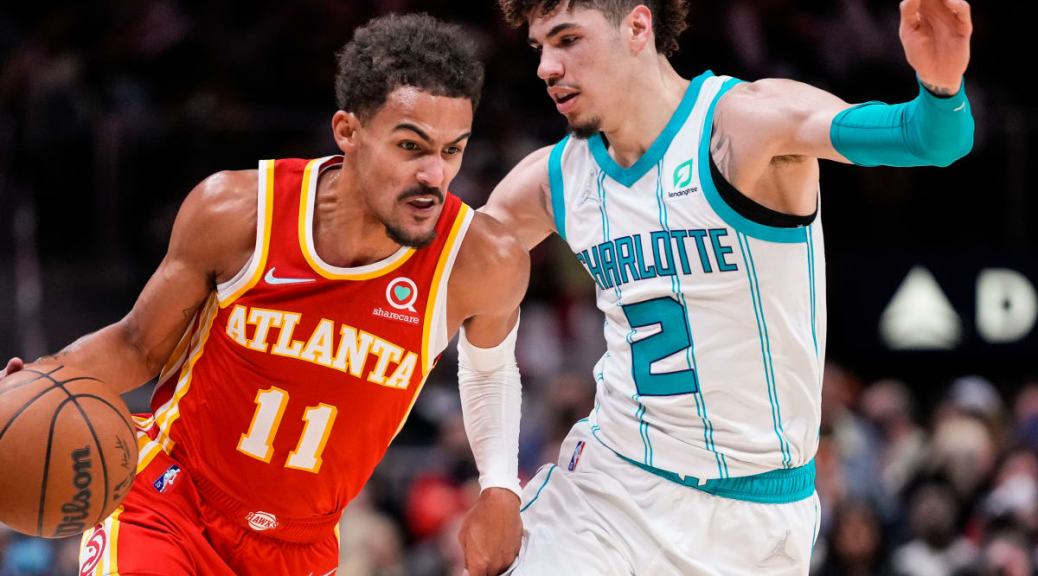 While the debate for who’s the better young lead guard, the Hornets’ Lamelo Ball or the Hawks’ Trae Young wll be better determined in the future, the debate for who’s the best team right now, Charlotte Hornets or Atlanta Hawks, will be determined Wednesday night at State Farm Arena in Atlanta. This episode of this budding rivalry, Hornets vs Hawks – Lamelo vs Trae – will determine who keeps their season alive one more game for a chance to make the 2022 NBA Playoffs.

In actuality, it wasn’t expected that either team would be in this position. Atlanta, who was coming off an Eastern Conference Finals appearance, was looked at as team that would safely make it into the playoffs without needing the Play-in round. Charlotte, on the other hand, was looked at as a team that might not have made the top 10 of the conference. Neither of these narratives were exactly true, for one reason or another, so here we are. So, who has the advantage in this huge matchup?

If the season series is any indication, we’re looking at this ending in a tie. Ok. Well, maybe it goes to Overtime. Both teams finished the regular season 43-39, and the season series is tied 2-2 with each team winning once on the other’s home floor. Biggest margin of victory was the 22-point victory (113-91) in January by the Hawks, in Charlotte. The other three matchups were much closer, which would be expected from two pretty evenly matched squads.

One key stat is, the 43 wins by Charlotte is the most by a team finishing 10th in the Eastern Conference in 23 years.

Charlotte is a team that loves to get up and down the floor and score a lot of points. The transition game is where Ball is the most dangerous. That’s a great thing when you consider the Hawk’s weakness is their defense. However, in a slower paced game, the Hawks would be probably be in a much better position to slow down the Hornets. Hawks’ big-man Clint Capela is a capable rim protector and rebounder. If the Hornets are out of their comfort zone in a grind it out game the Hawks could have a clear advantage.

A faster pace suits players like leading scorer Miles Bridges (20.2 ppg, 7 rebs), who is an undersized big who might enjoy a little more success out on the perimeter.

However, the biggest key is Ball (20.1 ppg, 7.6 assists). At this stage of his career, he’s a much better player in transition. This helps him make all those spectacular plays and get the ball to guys like Terry Rozier (19.3 ppg, 4.5 assists), an Kelly Oubre Jr. (15 ppg). However, the Hornets will be without Gordon Hayward, who is nursing an ankle injury.

While tthe Hawks could probably benefit from a slower paced game vs the Hornets, they’re not a a slow down team and have plenty of offensive weapons of their own. Everything begins with Young (28.4 ppg, 9.7 assists) and his insane shooting ability that has him compared to Steph Curry. However, this season and last he’s showcased just how good a passers he is. He has guys to get the ball to, like Bogdan Bogdanovich (15.1 ppg), and Danilo Gallinari (11.7 ppg). but he doesn’t have quite the number of weapons Ball does. Like much of the regular season, the Hawks are dealing with injuries. John Collins, the Hawks’ versatile big-man is one example. He won’t be available until the playoffs, if the Hawks make it.

Again, defense is where the Hawks struggle. The Hawks rank 21st in the NBA this season giving up 112 points per game. However, the Hornets are worse at 25th in the NBA giving up nearly 115 per game. So, the opportunities will be there offensively.

In a lot of ways Atlanta’s season has been quite disappointing, but a lot of that is due to injury. The one constant has been Trae Young, who’s showing exactly why he was an All Star and will be for years to come. The same can be said for Lamelo Ball.

Going forward Ball has more upside than Young, mainly due to his size and his better than expected perimeter shot. Right now, the Hawks have the advantage over the Hornets because of their home court advantage. However, there’s no doubt the Hornets are than capable of winning a game in the road, especially when a lot more of the pressure to win will be on the team wearing Red & Yellow. Expect a tight game at State Farm Arena. The winner gets a trip to Cleveland to play the Cavaliers on Friday night, for a chance to be the 8th seed and face the top seeded Miami in the first round.

BALL ABOUT THE SOUTH PODCAST